Perched on a trolley in A & E, pain from a torn bicep, broken shoulder blade and 3 fractures in my opposite leg. My head spun with the reality of my mistakes. I needed Anna. Shocked, she held me. We were together, that was all that mattered. I had spent four days in my hospital room, and I ached each day until she arrived. Then I let it all out. I couldn’t deal with myself, I didn’t understand and I needed to tell her. To justify it to her. To ask if my guilt was valid.

I was no longer in my element and I was lost. Dependent and uncomfortable.

Some people surround themselves with objects and others draw, some adopt a religion or start to climb, others become radical extremists or mountaineers. This is how we identify ourselves. Essentially our own identity is only a thought process in our own mind: who we think we are or who we want to be. I changed my thought processes a few years ago, dampened down my identity as a broadcast engineer and added a new string to my identity: that of a climber. This is someone I thought I was, someone I want to be.

Our thoughts do not define us beyond a moment: they change. They can consume us. Ultimately, thoughts are just things also. Things that can be exchanged and developed. In a healthy mind they do so constantly and without question. Tolerance and compassion can therefore be learned.

After my fall I tried to seek justification. I tried to find a purpose. Where was my purpose now, I asked myself.

Bills mounted. I craved appointments. When would I be operated upon? Would my arm be fit to prove my worth again? It became difficult to think. There were too many objects in my head. Objects that I had placed there.

My natural survival mechanism was to absorb myself in the fix. I had drive and I have ego. I could do this. I found solutions in talking of expeditions, in talking of training.

But I couldn’t do it. I grew mentally weaker and paranoid.

In our four small walls I lost thought of who I really was. My injuries seemed to have dislocated me from my concept of society, and from what I perceived to be the serious and worthy side of life; one where we take an active interest in other’s lives. I desperately needed to change.

I took the train to Paris to support the march in solidarity with the Charlie Hebdo killings, in solidarity with Muslim people in France and beyond. I left the dark, snow-filled streets of my refuge. Charlie’s land whistled by, and became a city. I hadn’t seen one since August.

Are we right to march on the subject of freedom of speech? And are people that were not there actually asking that question? Arguments and articles questioning “CHARLIE” were circulated, based on the Republic’s laws regarding the wearing of the Niqab and their reaction to the Israeli involvement in Palestine last summer. Will Self was there, being Will Self.

The feeling I got was a reaffirmation of our faith in the hotch-potch humanity we are left with after an atrocious week. The kind of affirmation normally scaled down to a crowded church, or a revivalist 1960’s festival. Surely this affirms our ability to change our thoughts.

With a broken shoulder and a limp that rendered me slower than a mollusc, albeit one constricted among the millions who gridlocked the streets: I was safe. Solidarity & kindness had never flowed better.

As I dragged my leg through the cold, back towards the train station, I heard the crushing ubiquity of “We Are The World” tumbling out of a balcony window. I stopped to rest for the habitual check on Facebook and Twitter: my acquaintances persisted in seemingly mistimed updates of climbing and skiing the big white pow-pow.

How would I like to live life, and could I really align it with the world that we witnessed last week? I tried to organise my guilt, the guilt of seeking a life that escapes the seriousness of humanity’s shortcomings, far from racism and evil.

I fell 70metres and survived. Is it right that in pursuit of my self initiated, self rewarding, seemingly trivial pastime, that I was saved from death when last week our failings in humanity as a whole lead to 20 deaths. Only 17 deaths are mentioned in the press but we must remember that as a race we are responsible for 20 deaths in total, including the 3 gunmen.

The mountains are oblivious to hatred. Most people that foray into them are optimistic. Maybe mountain life contains a model from which the rest of the world can learn and follow.

It was due to the same optimism for our race that I had travelled there in the first place, believing that every little helps. Now, for the first time, I wanted to stay in Paris. It was different than before my fall: now I wanted to allow the city to continue teaching me that which the mountains had started.

At one point my path split. I had a choice of a distant empty pavement across a four lane road, or a closer alley, plugged by a bunch of young Asian guys. The far option was a hassle for my hobbling leg, so despite my reservations, and in my bright yellow Norona pro shell jacket, I decided to squeeze through past the youths. I was greeted politely with smiles, and they all moved as soon as they saw me. I hope that attitude lives on, in my head as well as in theirs.

A stranger, Cyril, chatted to me in a bar – “Le Relais d’Auvergne”, or “Aubergine’s Belay” as I called it in my head. Unfortunately, as a local, he confirmed what I had wondered. The crowd at the march had not represented an accurate cross section of the Parisian population. Too many white people. The reasons for this can only be speculated upon.

Change is a social necessity, but humans have to understand it before they allow it. I have been shown some of my shortcomings of late and although most are temporary, all must be worked on equally.

Maybe there is hope, for all of us. 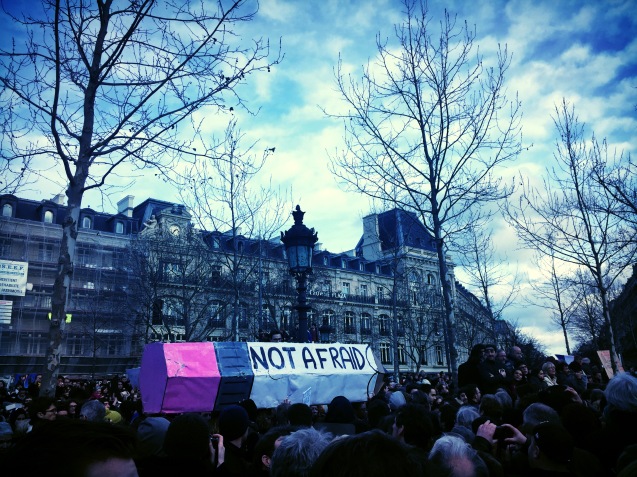 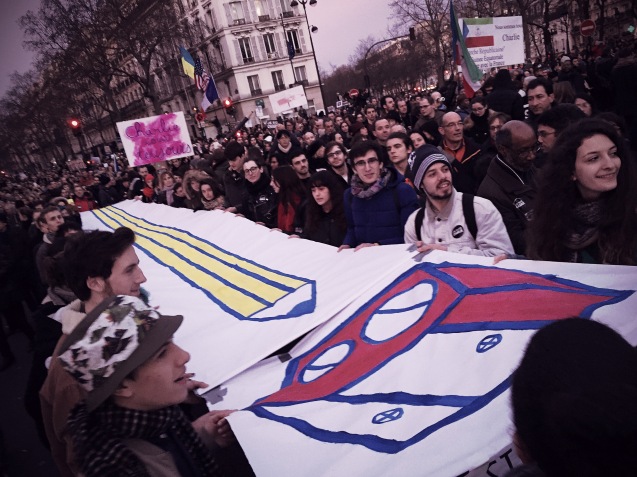 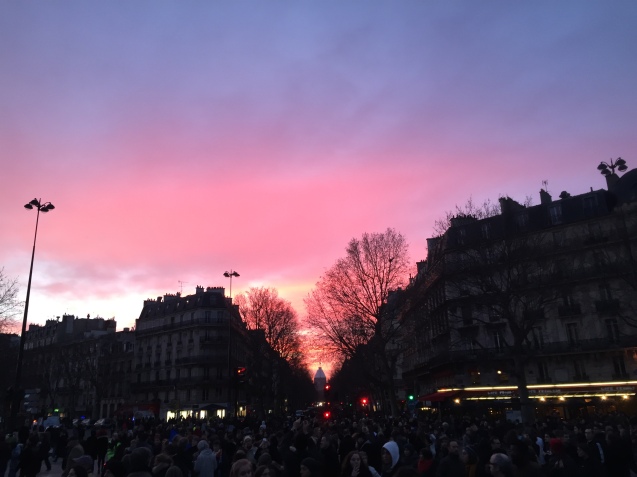 One thought on “Aubergine’s Belay”