Just under 2 years ago I chose to stop spending the majority of my life doing things I actually didn’t want to do -namely constantly, unrelentingly, working.  However that doesn’t mean I wanted to stop achieving. Far from it.  I seem to be driven to repeatedly set myself targets. Fueled by a passion for the mountains, I gain confidence and identity from climbing (oh, and I’ve been told that I’m a skier now too apparently).

There are two definitions of this word.

To American extreme skiers Nate Wallace and Seth Morrison, the word “Chamified” is almost a coming of age thing that happens post spending time in Chamonix. The lift access here makes some of the “gnarliest” mountains in the world also the most accessible. They can’t fail but be super psyched whilst spending prolonged periods of time staring at each other intently and facing their own mortality on a regular basis.

However, to certain intuitive ski bums, “Chamified” is also a syndrome of apathy that takes over when you spend more than a few weeks here. “I can do that tomorrow/when the conditions are spot on perfect”. “Let’s go for a beer and look super gnarly in the bar with our new jacket and goggle tan, resting on our laurels that we did something big in the mountains once”. Or maybe not even as cynical as that – “lets just spend time relaxing with good friends and do something relatively safe and easy for a while.”

I’m 37, my life has changed, my orange ski pants are blackened by the mountains anyway, but the lack of tick boxing/alpine north faces/multi day endurance challenges in the past 2 weeks has left me worried that I was slipping into the second Chamified syndrome and becoming just like any other ski bum in any other alpine resort. Chamonix ski bums should be different. We aren’t seasonaires, we’re hardcore mountaineers, aren’t we?

To console myself, I needed to think of why I came here in the first place and that was simply to learn. There is a huge mountain community here – one of the most important resources you can have whilst trying to learn something. One day, when I try and do something super gnarly, I may need a few skills and experiences to fall back on. So have the past few weeks fitted that bill? What have I learned? What have I shared with my friends? Has anyone learned from me? What have I experienced? –

At the end of the day, you can be the most accomplished mountain expert, guiding people on a route that you’ve maybe done 10 times before, wondering what you are going to get out of the day. Wondering why you are doing this again. Wondering if you are progressing. Then suddenly, bam, you learn a massive lesson in navigation or one of your friends beams back at you, so happy to be in an environment they haven’t experienced before.

I’m no guide and hadn’t done the route quite 10 times, but what I just described happened yesterday. It was massively rewarding.

The past 2 weeks have been some of the best of my life. Yes I’m a ski bum, yes I’ve had a few too many beers as well but man, I’m bloody happy to be Chamified. 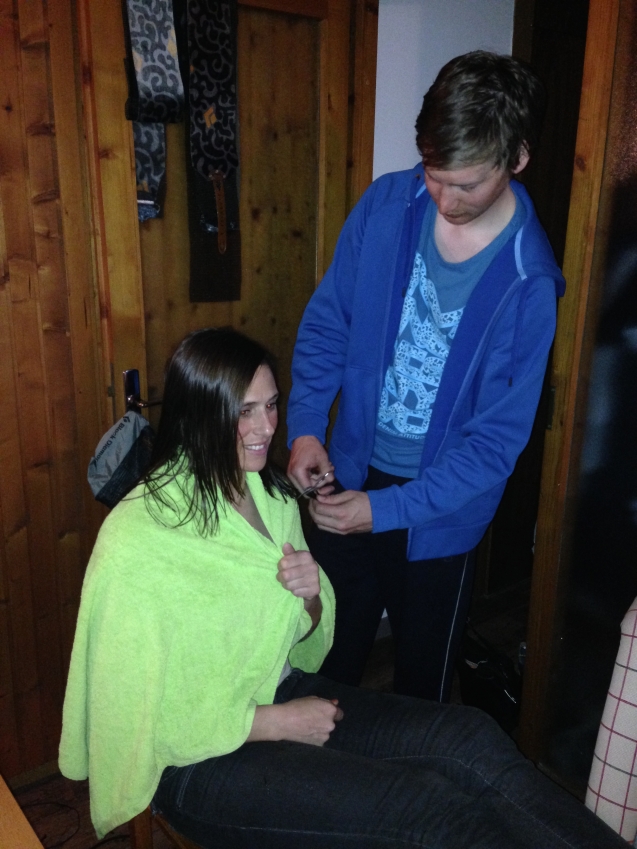 North Face of the Aiguille du Midi with it’s new coat that went down well with everyone.

Fresh powder had been a long time coming. Descending from the Midi mid station.

I said that skiers left was a bad idea. This was a good spot.

As soon as the cloud cleared we headed up the midi for my first taste of Grand Envers. 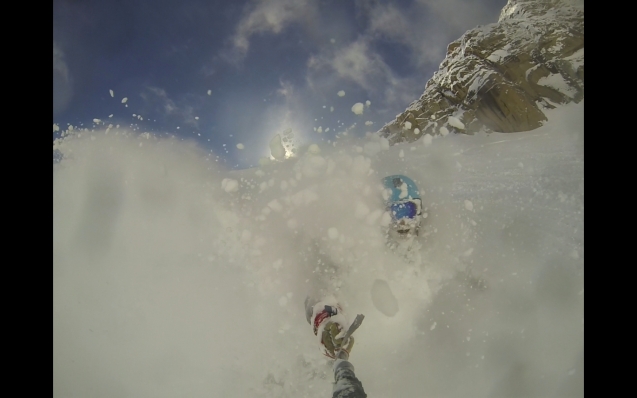 Headin down the James Bond track to Cham

This had been a good day.

Björn drops in at the top of Le Brevent somewhere

On the other side of the valley we could look over at a fully tracked out Grands Montets  and down at fresh powder fields right in front of us.

Aiguille Verte and Les Drus from Anna’s work at Echobase in Les Praz. 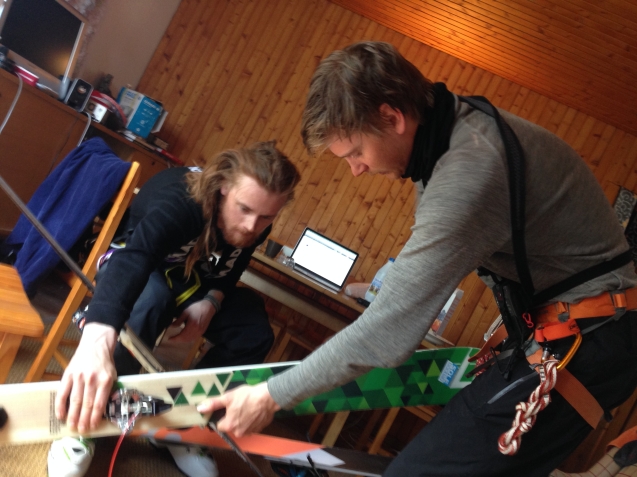 A steep skiing lesson above the Mer du Glace.

“Steve, Steve, take a picture, take a picture”…. I actually couldn’t go top help him as I was crying with laughter too much. When Martin finally released his binding, Björn carried on down the mountain head first. 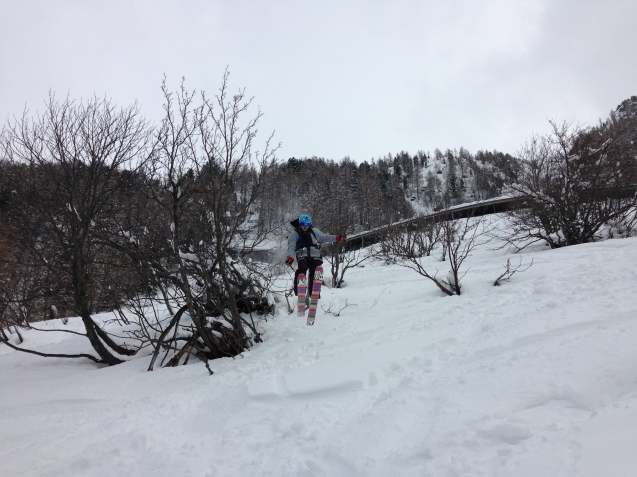 Björn tries hard to get in on the action. 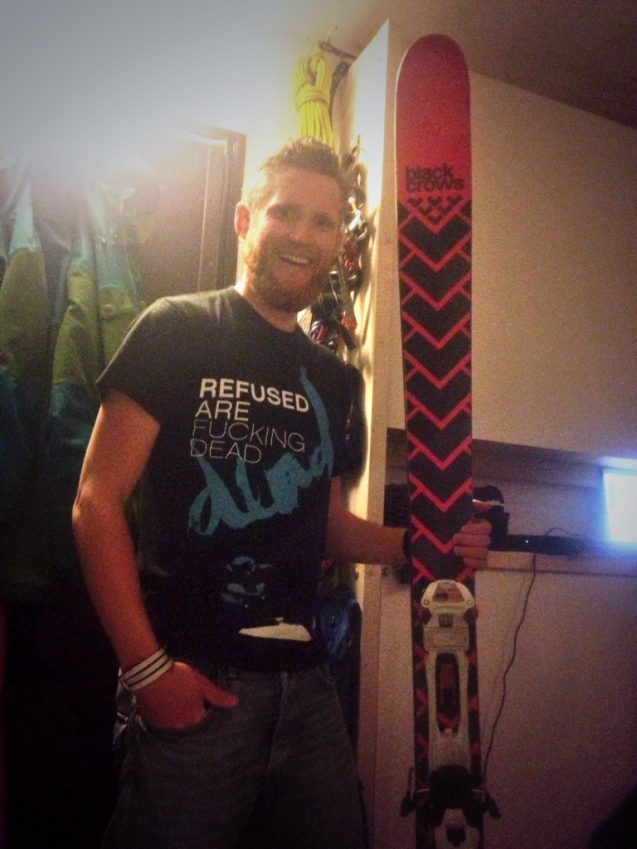 Björn’s binding exploded when he dropped the train tunnel so Karl offered to lend him his skis. WTF! After 1 kick turn on these things Björn just wanted to go home.

Likely crew of to Italy for the day.

Made it across the Vallee Blanche, just across the border to the top of Helbrunner, but thick cloud the other side made us turn back. We did get first tracks down the North flank of the glacier though.

Björn gets up close and personal with the seracs. 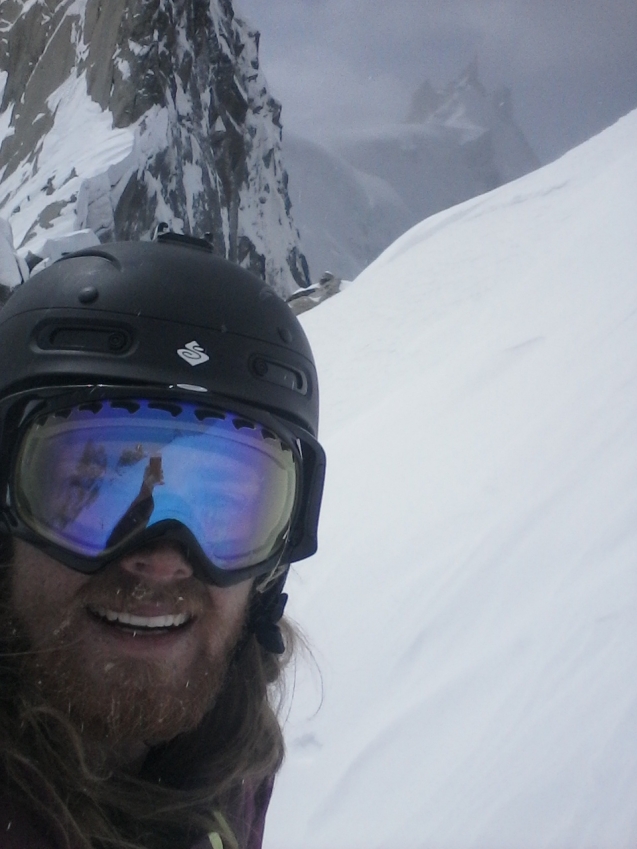 Under the midi bridge.

The grey yoga suit that I have come to love so much. 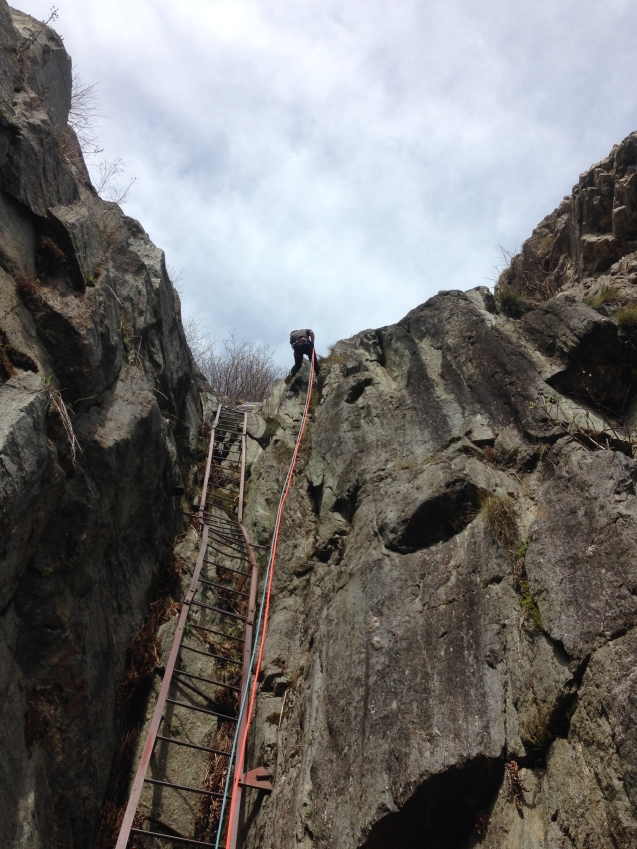 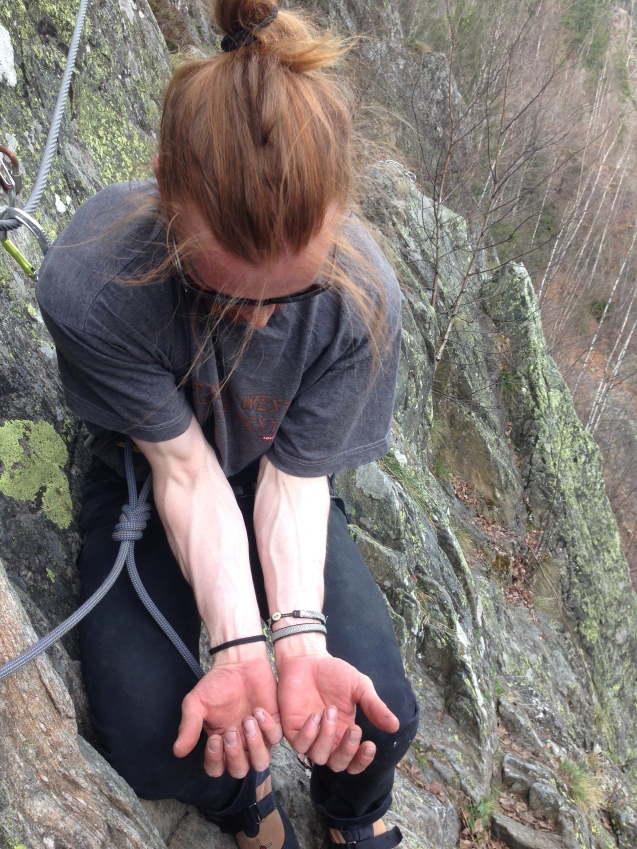 Martin, pumped for the first time, loved his introduction to rock climbing. 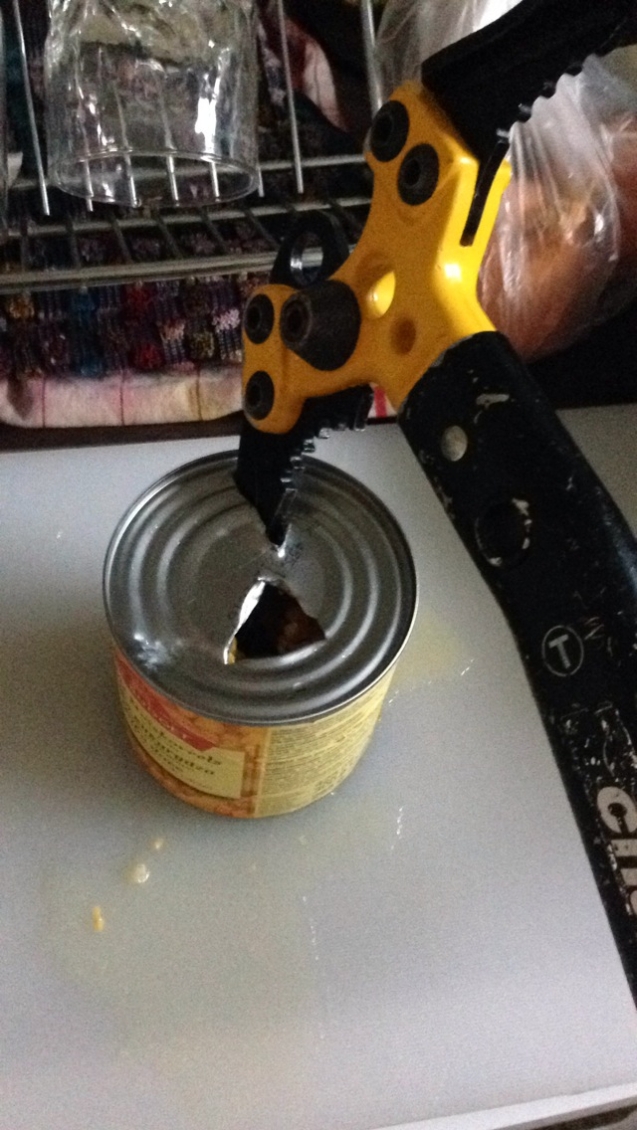 Heading up the Cosmiques.

“You enjoying this yet?” 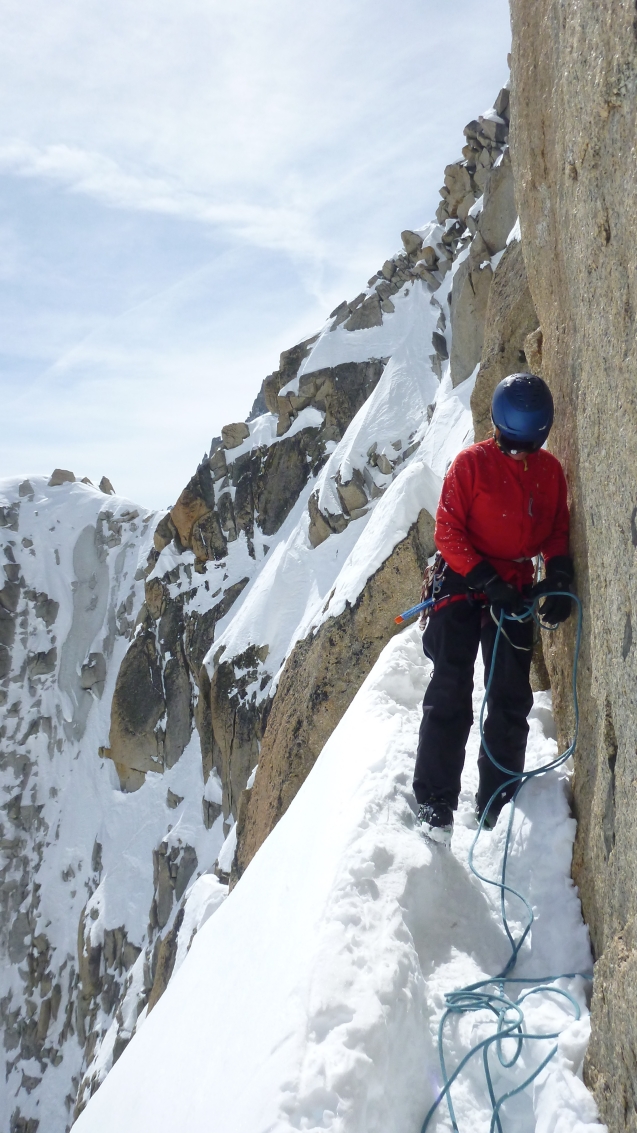 It really is something special being up so close to this orangey granite. 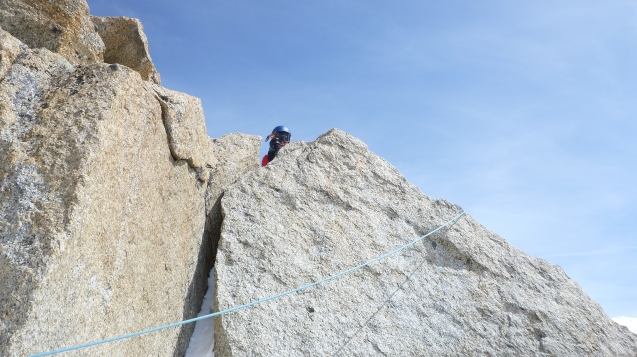 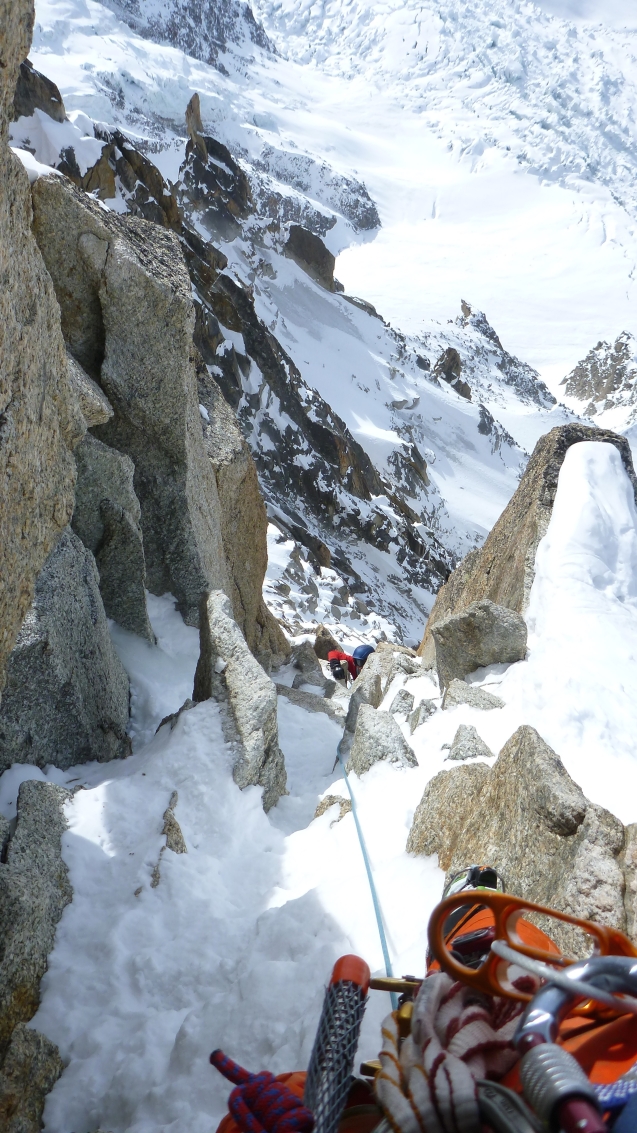 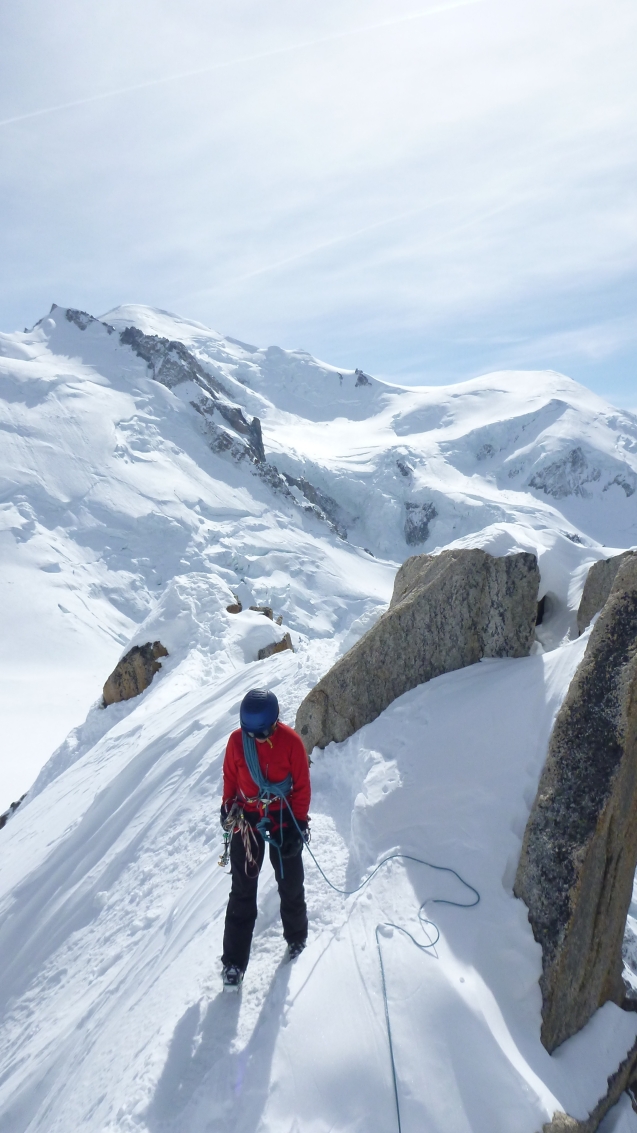 Walking out with Le Mont Blanc as a back drop.

James Bond track was a good laugh. Think it’s prob best not to miss the train these days. 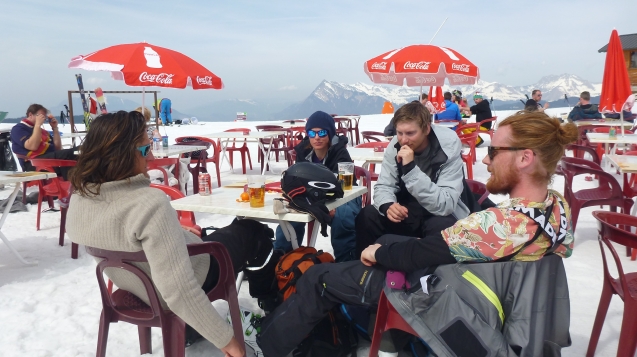 Karma’s gonna get you.

Looking back from Le Grand Massif to Le Mont Blanc Massif. Aiguille Verte on the left. With the Midi just right of middle we commented (as Steve always likes to) on how far it is from the top of the Midi to the top of Mont Blanc.

Anna waiting for Björn and Phil in Flaine. 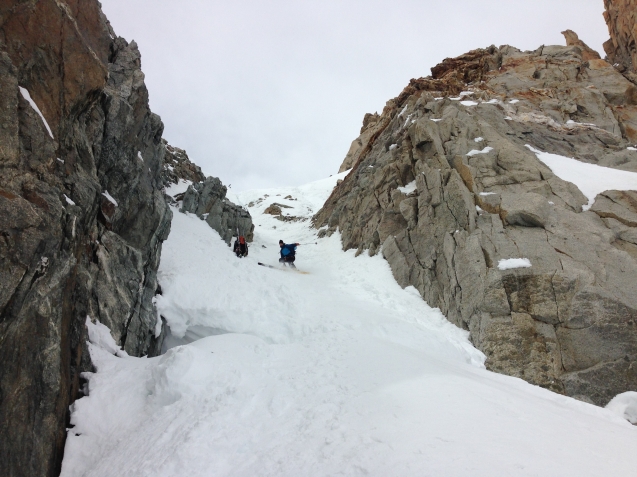 Björn heading down the other side of the Col du Chardonnet, off to find a Couloir (Pointe d’Orny) near Champex.

Hinrik doing what he does best – going straight.

After a miss hap with the map (and our minds) we opted to drop down into the Glacier du Tour and catch the bus home rather than hitch for hours on end. (Björn) 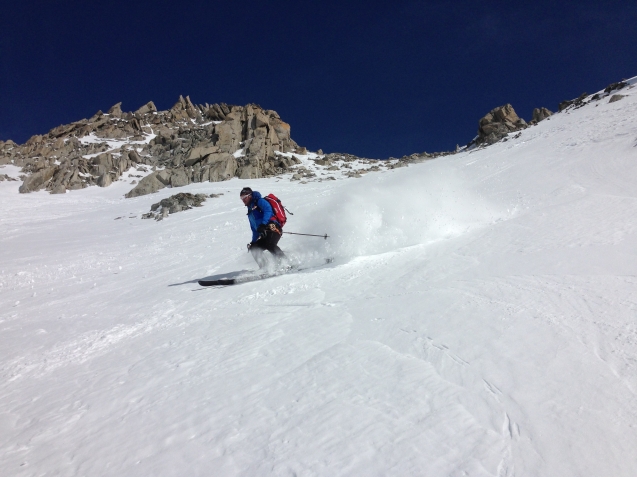 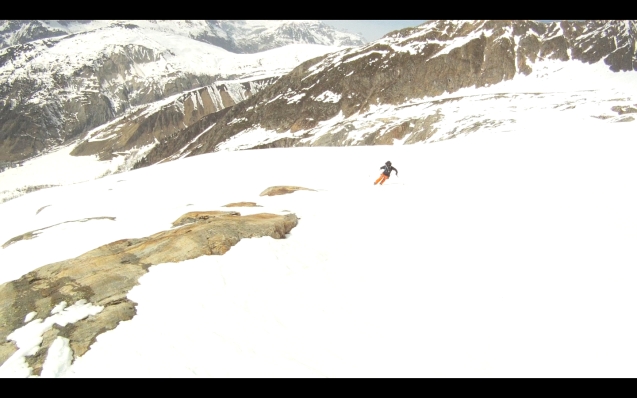 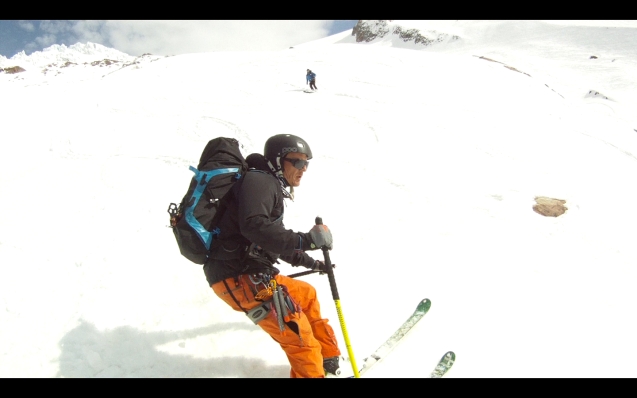 Not so happy. Björn heads back to Iceland to complete his studies. A huge loss. We love you man. 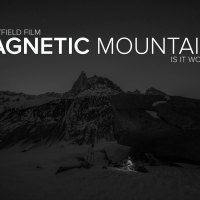 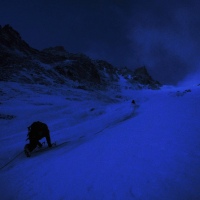 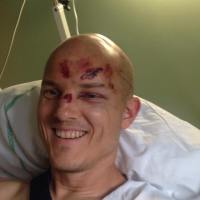